Today, we stood in Borne, with our renewed ‘stil of niet (2.0)’ costume. Both Axel and Raquel are still young, so they grew out of the old version of the suit. They did, however, really like their old costume, and received many positive reactions to it, so we decided to renew it

A new costume always takes some getting used too. Despite it being a remake of an old costume, it still feels new because it looks rather different. The color palette, for example, has been changed, and this version has wigs, so Axel’s and Raquel’s hair didn’t have to be colored anymore. Whilst it’s common for statues to not use a wig, we hoped that using one would help in looking more like an actual statue. Judging whether or not we achieved that goal is, of course up to you. 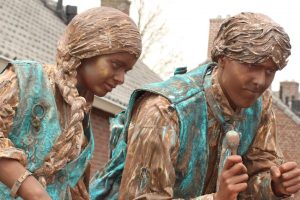